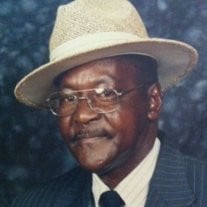 Alfred D. Holt Sr. was born January 9, 1942 to the late Mary Francis Williams and Jimmy Holt. He worked for Campbell's Logging and served as a Deacon of Bright Star Baptist Church for many years. He is preceded in death by his mother, father,... View Obituary & Service Information

The family of Alfred D Holt Sr. created this Life Tributes page to make it easy to share your memories.

Send flowers to the Holt family.