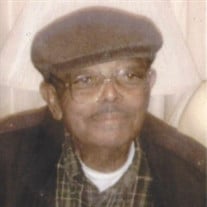 Mr. Irving was born on June 7, 1931 in Adams County, the son of Everelean Jones Irving and George Irving. He was educated at Painters Hill in Anna&#8217;s Bottom and was retired from International Paper Company after 44 years of service.... View Obituary & Service Information

The family of Mr. Arthur Lee Irving, Sr created this Life Tributes page to make it easy to share your memories.

Send flowers to the Irving family.