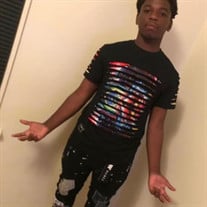 Bill was born September 8, 2001 in Natchez, the son of Kawana Woods and Bill Hunt Calvin, Sr. He received his education in the Natchez Public School District, where he participated in the choir. Bill was employed as a server at one of Natchez&#8217;s... View Obituary & Service Information

The family of Mr. Bill Hunt Calvin Jr. created this Life Tributes page to make it easy to share your memories.

Send flowers to the Calvin family.