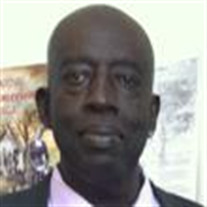 Mr. Hargrave was born on February 19, 1956 in Natchez, the son of Eddie Hargrave, Sr. and Julia Woods Hargrave. He was a 1974 graduate of South Natchez High School. Carl was a faithful member of Greater Tree of Life Missionary Baptist Church... View Obituary & Service Information

The family of Mr. Carl Edward Hargrave created this Life Tributes page to make it easy to share your memories.

Send flowers to the Hargrave family.