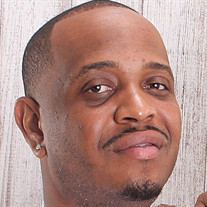 Mr. McQuarters was born on May 6, 1982 in Natchez, MS , the son of Clarence McQuarters and Joyce McQuarters. He received his education in the Natchez-Adams School District and Chamberlain Hunt Military Academy. While he was... View Obituary & Service Information

The family of Mr. Clarence Allen McQuarters created this Life Tributes page to make it easy to share your memories.

Send flowers to the McQuarters family.