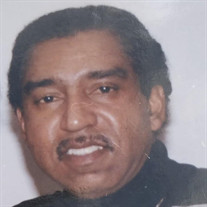 Edward was born on August 25, 1945, the son of Johnnie Beard and Dora Eva Freeman Beard. He attended school in Catahoula Parish and graduated from Jonesville Consolidated High School in Jonesville, Louisiana in 1964. Roy attended Grambling State University. In 1969, he was drafted into the United States Armed Forces where he proud served his country in Germany. Roy resided in Bolingbrook, Illinois and retired from the United Parcel Service (UPS) with 30+ years of service. In 2010, he and his family relocated to Baton Rouge, Louisiana. He enjoyed hosting gatherings with family and friends, grilling and football games. He was a caring husband, father, brother, grandfather, uncle and friend to many who will forever cherish his witty spirit and pleasant demeanor. His greatest joy was spending time with family and grandchildren. He was preceded in death by his parents, sisters, Venita M. Guidry, Velma Meredith, and brother Louis Arrington. Edward leaves to cherish his memories: wife of 48 years, Alfreda Donnan Beard; his children: Vita Blake, Courtney Beard (Kalvin) and Jonathan Beard (Nicole); grandchildren: Nailah, Jada, Mason Edward, Mya, and Mileena; sister Myrtle Bossier (Hillary); brothers Clyde Beard and Fritz Beard (Dietrich) and a host of loving cousins, nieces, nephews and friends. Online condolences may be made to the family at www.westgatefh.com.

The family of Mr. Edward Roy Beard created this Life Tributes page to make it easy to share your memories.

Send flowers to the Beard family.