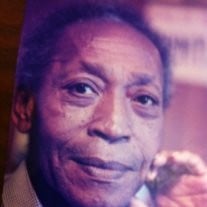 Jimmy "Soul Man Lee" Anderson was born on November 21, 1934, in Woodville, MS to the late Jennie Lee Rising. He was reared by Mrs. Leola Newell in the Maple Street neighborhood which he lived on and off for most of his life. He departed this life on Saturday, October 5th, 2013, at the Community Hospital in Natchez, Mississippi. He accepted Christ and was baptized at an early age at the Bright Star Baptist Church. Being a multi-talented individual, he became a shoe shiner, mechanic, truck driver, carpenter, painter, police officer, DJ, singer, guitar player, harmonica player, and drummer. His first and foremost love was playing the harmonica which he began playing at the age of 8. He mastered the instrument with the greatest of ease entertaining customers at a friend's snoball wagon. He served his country for two years in the United Sates Army before launching his career. He along with Mrs. Newell was dedicated members of the Natchez Chapter of the NAACP and was known as champions in the fight for justice and social equality. Later in the 1950s, he moved from Natchez to Baton Rouge where he lived the life of a blues man, serenading crowds with his harmonica in the juke joints and in other towns east of Texas, Louisiana, and Mississippi. While in Baton Rouge, he put together a band, Jimmy Anderson and the Joy Jumpers, with two guitar players, a drummer and Jimmy would sing and play the harmonica. During this time he met and associated with several blues legends such as Lightnin' Slim, Silas Hogan and Slim Harpo. The band recorded their first record, I Wanna Boogie, in early 1962 and the second, Naggin' at the end of the same year. Naggin' made it to Europe where it gained fame and allowed him to participate in blues tours in Austria, Holland, and London. Jimmy "Soul Man Lee" returned to his hometown in 1969. He appeared and revived his sounds of the 70s at the Great Mississippi River Balloon Race, in a featured article, The Natchez Democrat, November 7, 2006 entitles "Soul Man Looking to Come Back?" He said that in the mid 1970s radio audiences would tune in to Natchez's WNAT for the sounds famous artists, but "they all knew me, I was the voice of Natchez." He also enjoyed the title of "King of the Swamp Blues." Soul Man served as a mentor to amateur Djs Johnny Lemon, George Lee and others to come. He made history along with Walter Squalls and Curtis Ross as being the first Black Djs on radio WNAT. He also worked in Centreville, Mississippi playing country music on radio station WZZB? WSSL AM. He later moved on to Vidalia's KVLA. In later years, the talented blues harmonica player, Hezekiah Early, Elmo Williams, and brothers Theodis and Y.Z. Easley brought their Bluff City blues to audiences across the country and overseas. He is preceded in death by his mothers, Jennie Lee Rising, Leola Newell, one son Joshua Dunbar, three uncles, and one aunt. He leaves to cherish his rich legacy, sons Henry Bell Dorsey, Baton Rouge, LA; Darryl Dunbar, Grenada MS; DeWayne Anderson, Minneapolis, MS; daughters Tracy Robinson McGee (KeWayne), Garland, TX; Gloria Bell and Hilda Bell both of Baton Rouge, LA; Jannie Anderson, Baton Rouge, LA; Mary Dunbar, St. Francisville, LA; Patricia Anderson, Woodville, MS; brothers Jimmie "Mike" James, Jr. and Oliver James (Martha) both of Woodville, MS; one sister Linda James McMurtry (Melvin), Natchez, MS; 10 grandchildren, 7 great-grandchildren, and a special cousin Essar Wilson (Cheri), special friends Sandra (Boogie) Robinson, caretakers Hilda and Kilwana, Walter Squalls, Robert Johnson (Bobby Js), Mr and Mrs Vincent Joos, along with a host of nieces, nephews, cousins, and friends. In lieu of flowers, donations for Jimmy Anderson may be made at any Regions Bank branch.

Jimmy "Soul Man Lee" Anderson was born on November 21, 1934, in Woodville, MS to the late Jennie Lee Rising. He was reared by Mrs. Leola Newell in the Maple Street neighborhood which he lived on and off for most of his life. He departed... View Obituary & Service Information

The family of Jimmy "Soul Man Lee" Anderson created this Life Tributes page to make it easy to share your memories.

Send flowers to the Anderson family.