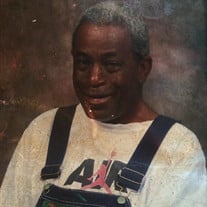 Mr. Harris was born on January 5, 1954 in Natchez, MS, the son of Agnes Watson Harris and Johnnie (Mane) Reynolds. Larry was educated in the Natchez Public School System. He was employed with R.H. Donnelly in Chicago, IL and the Taste... View Obituary & Service Information

The family of Mr. Larry Harris created this Life Tributes page to make it easy to share your memories.

Send flowers to the Harris family.