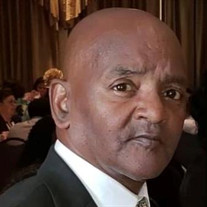 Larry was born March 18, 1959 in Natchez, MS, the son of Gloria Luss McCoy and the late Albert Irving, Sr. He was a 1977 graduate of North Natchez High School. He was a retired supervisor from DOW Chemical of Baton Rouge. Larry was a member... View Obituary & Service Information

The family of Mr. Larry Darnell Luss created this Life Tributes page to make it easy to share your memories.

Send flowers to the Luss family.