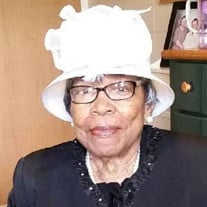 Mrs. Lynch was born on August 11, 1921 in Sibley, MS, the daughter of Calvin Thompson and Sarah Galmore Thompson. She was educated in the Adams County School System. Margaret was a homemaker and was retired as a housekeeper. Mrs.... View Obituary & Service Information

The family of Mrs. Margaret Thompson Lynch created this Life Tributes page to make it easy to share your memories.

Send flowers to the Lynch family.