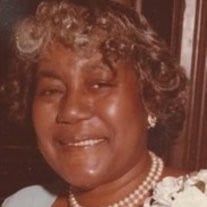 Mrs. Davis was born April 8, 1930 in Natchez, the daughter of Mariah Washington. She was retired. Mrs. Davis was President of the Usher Board, member of the Missionary Society, and the Benevolent Committee of St. Mark Baptist Church. She was... View Obituary & Service Information

The family of Mrs. Mary Davis created this Life Tributes page to make it easy to share your memories.

Send flowers to the Davis family.