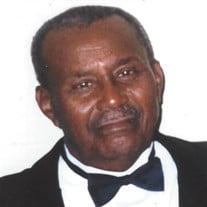 Mr. Jones was born on January 1, 1929 in Natchez, the son of Silas Jones, Sr and Excelena Tyler Jones. Merrick was retired from St. Catherine Ready Mix, Inc. He was a member of Smithland Baptist Church where he served as a deacon.... View Obituary & Service Information

The family of Mr. Merrick Jones created this Life Tributes page to make it easy to share your memories.

Send flowers to the Jones family.