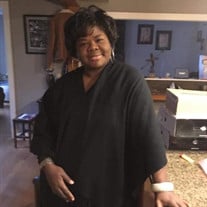 Paula was born August 30, 1979 in Chicago, the daughter of Joyce Marie Lewis and Jacques Cooper. She was a 1998 graduate of Vidalia High School and also attended Co-Lin College in Natchez. Paula was a member of Jerusalem Baptist Church where... View Obituary & Service Information

The family of Ms. Paula C. Lewis created this Life Tributes page to make it easy to share your memories.

Send flowers to the Lewis family.