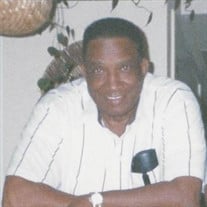 Mr. Jackson was born on December 20, 1932 in Natchez, MS to the late Carrie Jackson and the late Edward Bernard. After graduating High School in Natchez, he joined the Army. Later he moved to Buffalo, NY. Robert was a member of the Calvary... View Obituary & Service Information

The family of Mr. Robert L Jackson created this Life Tributes page to make it easy to share your memories.

Send flowers to the Jackson family.