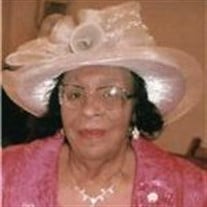 Thelma Clark better known as ""Miss Sally"" entered peacefully into eternal rest on Thursday, August 21, 2014. ""Miss Sally"" or ""The Moose on the Loose"" as she was affectionately called, was a loving and fun person. She enjoyed working and... View Obituary & Service Information

The family of Ms. Thelma Lee Clark created this Life Tributes page to make it easy to share your memories.

Send flowers to the Clark family.