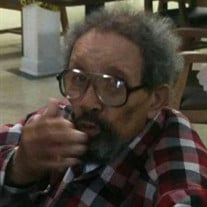 Mr. Harris was born on March 8, 1927, the son of Mary Ann Earls Harris and Willie Harris, Sr. in Bolivar County, MS He was retired from Caterpillar as a millwright. Willie was member of New Morning Star Missionary Baptist Church in... View Obituary & Service Information

The family of Mr. Willie Harris Jr. created this Life Tributes page to make it easy to share your memories.

Send flowers to the Harris family.